With celebrations often comes Champagne; we’d have to agree that this Saturday’s royal wedding of Prince Harry and Ms. Meghan Markle is certainly an occasion for such. In recent years the U.K. has made a name for itself in the sparkling wine industry with products that rival favored classics, but not all sparkling wine can be called Champagne. Do you know what makes sparkling wine considered true “Champagne” or how it is made? Do you think Prince Harry and Markle will choose a true Champagne or will they choose, as we call it, a "Britagne"? While the vast majority of sparkling wines follow the same production methods, the distinction among true Champagne stems from the unparalleled geographical qualities of the region.

The history of Champagne all began more than 65 million years ago when a prehistoric body of water, that once covered what is now Britain and France, receded leaving behind chalky subsoil deposits rich with minerals and fossils. Fast forward a few million years to when the same chalky subsoil was disrupted by earthquakes and became mixed with the raw soil below. This ultimately resulted in the creation of the characteristically unique, sloping hills of France’s Champagne region. Just 90 miles northeast of Paris, Champagne also hails as one of the world’s coolest wine-producing regions, lending a major role to their prestige. In wine production, cooler temperatures cause the grape to strain for survival, producing a more potent flavor and aroma; however, this makes it more challenging to yield full and evenly ripe grapes. With the difficult climate several growers tend to train their vines low to the ground in order for them to absorb and retain any reflected light from the soil below.

As if the growing process wasn’t difficult enough, the demanding steps, extensive knowledge and guesswork required for producing Champagne ultimately set it apart. Winemakers make anywhere from 30 to 60 different still, base wines made from 3 different grapes (chardonnay, pinot noir, and pinot meunier) that are all eventually blended to create the base of their Champagne. This initial blend is made as the first part of a complicated two step fermentation process, that will later produce bubbly Champagne once the cork is popped!

Harvesting is one of the most crucial parts of wine making, especially with sparkling wines. Since pinot noir and pinot meunier are both black grapes, to avoid any pigment or harsh tannins that could be extracted from the grape skins, they must be harvested by hand to ensure clarity. After they are pressed within the vineyards, each batch is separately stored in order to differentiate between the quality and characteristics of the base wines. Often makers always keep a reserve of each still wine to give a Champagne blend a more complex palate and to be used within secondary fermentation.

Following modern innovations, winemakers typically ferment the batches within steel vats (contrary to the historical wood casks) in order to have more control over the temperature during fermentation. When sparkling wines are fermented at a cooler temperature it helps preserve their delicacy. 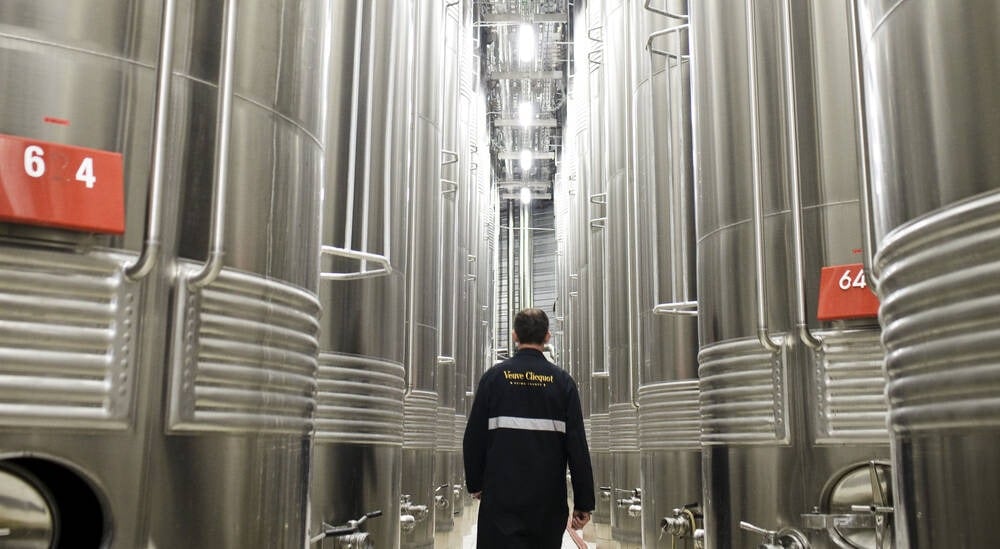 Winemakers produce a nonvintage, through a process called assemblage in which they blend together the still wines reserved from past years. It is them mixed with a combination of sugar and yeast and bottled to undergo the secondary fermentation process. Once the yeast and sugar react with one another it produces a CO2 gas, which becomes trapped within the bottle forming the “bubbles” we all know of after the cork pops!

Off go the bottles to continue their process as they rest for at least a year before the next step of the process! Following their rest, the champagne goes through a 200 year old process (which has since been modernized) called remauge which removes used and unwanted yeast from the bottles by “riddling” them. This is done by very slowly turning the bottle upside down to allow the yeast to escape the bottle by sliding down its walls and collecting in the neck. Next the bottles are turned completely upside down and the neck is frozen in order to freeze and remove the unwanted yeast sells in one swift process. Lastly some of the reserve wine and sugar are quickly combined and added to occupy the space left behind by the removed yeast. Voila, the champagne is finally made and ready to rest until it is uncorked!

While other vineyards around the world may follow the same process as the winemakers in Champagne, France, their rare region and cool climate set their sparkling wines apart from the rest of the world. We assume that Prince Harry and Ms. Markle will show their British pride and chose and exemplary "Britagne" for their reception! But we have to hand it to these winemakers, the process of making sparkling wine is no simple task!